"Which league has made the greatest contribution to the European Cup and the UEFA Champions League?"

On the panel were: 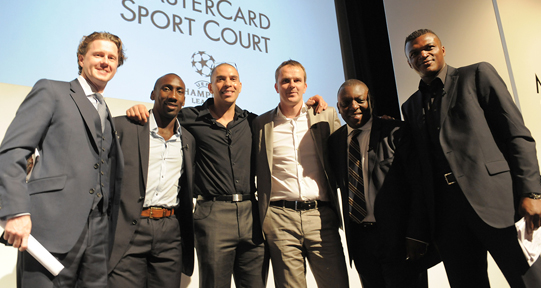 The MasterCard Sport Court voted La Primera Liga as making the greatest contribution to the European Cup and UEFA Champions League. In a tighter contest than Saturday's European Cup Final the Premier League powerfully advocated by Stan Collymore won the pre-vote and made the early running.

The Bundesliga proposed by Dietmar Hamann was voted out first but not before the former German captain's advocacy of strong financial prudence as the single factor that separated the Bundersliga from the rest of Europe. On being voted out he left the audience with a parting warning; not only did another Manchester United v Barcelona final endorse the 'debt' culture in football but that UEFA's Financial Fair Play rule would bring about greater equity within the game and destroy the superpower strangle hold on the Champions League trophy.

The Dutch Eredivisie were the next league to leave the debate though the audience clearly warmed to Jimmy Floyd Hasselbaink. His passionate espousal of Total Football and its value to the European game were much appreciated. He went onto claim that the Erevidisie was not the best league or had the best players but to had produced the most technically proficient footballers and had exported them to the best teams in Europe thus making them the greatest contributors to European scene. Such was the strength of his argument in the 2nd round that it posed a serious threat to Serie A and Marcel's Desailly's continued presence in the debate.

Marcel Desailly used all his Gallic charm to try and sway the audience as he placed great emphasis on the famous Italian catanacchio as a symbol of tactical superiority. Stating that over the years the system had been misconstrued by many as negative and stifling. He went on to argue that the opposite was true and insisted that not only had all the top teams in Europe adopted the formula as a spring board to the counter attack but it had tactically revolutionised the game. He went onto make a sound case for the winning and tactical mentality of the Serie A but fell at the third round.

Steve McManaman's sharp Saville Row suit and eloquent recital of Spanish achievement made a huge impact on the audience. Only a passionate Stan Collymore could match his football knowledge or dexterity stating in his final summation that no other league had dominated the European trophy with such a diversity of teams which epitomised the leagues strength and contribution to European football. Steve Mcmanaman responded by suggesting that great teams have nick names like Manchester United's Busby Babes but reminded the audience how they were 'humiliated' by Real Madrid's Los Blancos! He went onto say the Galatocos (Zidane, Figo, Raul and R. Carlos) epitomised the brilliance of what La Liga had to offer and that more players had won the 'World Player of the Year Award' whilst playing in La Liga than any other League.

The English 1st Division and Premier League pushed La Liga into second place for much of the debate however the skilful brilliance the Spanish league versus the consistency and diversity of the English league club won the day 60-40.

All the speakers were well informed and fluent. There was a competitive edge but an ambience of collegiality that brought great credit to them. Chairman Garth Crooks had little difficulty in controlling affairs and only once showed the yellow card.

Praise to the organisational skills of the MasterCard team, the Sport Court operational executives and hostesses, the production crew, and the staff of BAFTA all of whom made the night flow smoothly.

Once again the Sport Court maintained its reputation for a forensic debate of key issues in an entertaining ambience, showing that important issues can be debated and determined in an engaging, exciting way without being superficial.

Zidane goal wons best goal with 46% of the votes

Steve McManaman “Look at the records and stats, the strength of Spanish football. The Future's glorious, the Future's Spanish”

Stan Collymore “We may not win stylish but we've been continuous in our contribution to the European challenge for 6 decades!"

Join us at The Sport Court

If you have any questions regarding tickets for future events or becoming a member of the Sport Court please contact us at info@thesportcourt.co.uk or by pressing the contact us button.

We look forward to you seeing you at the Sport Court.